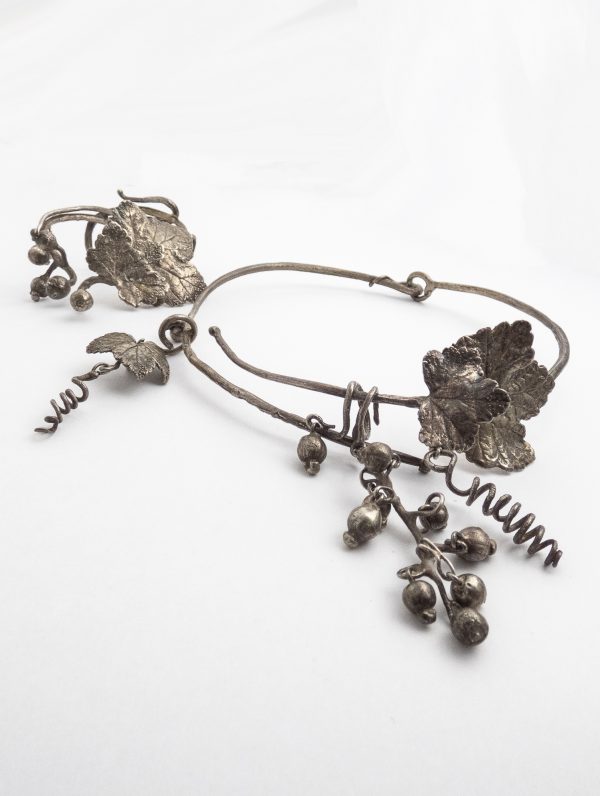 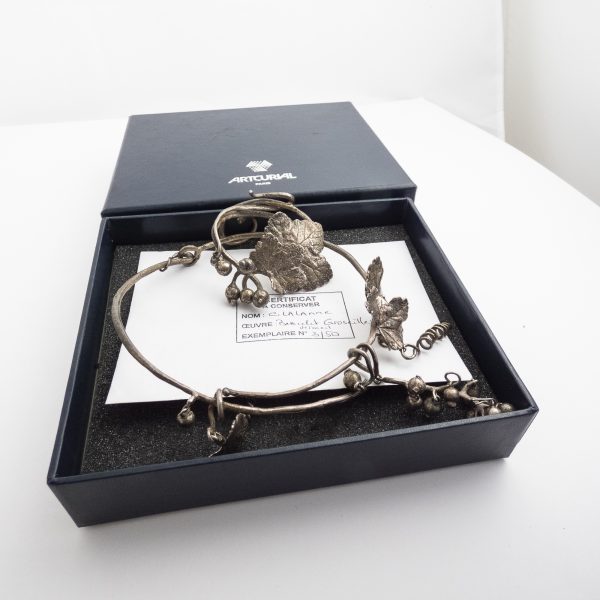 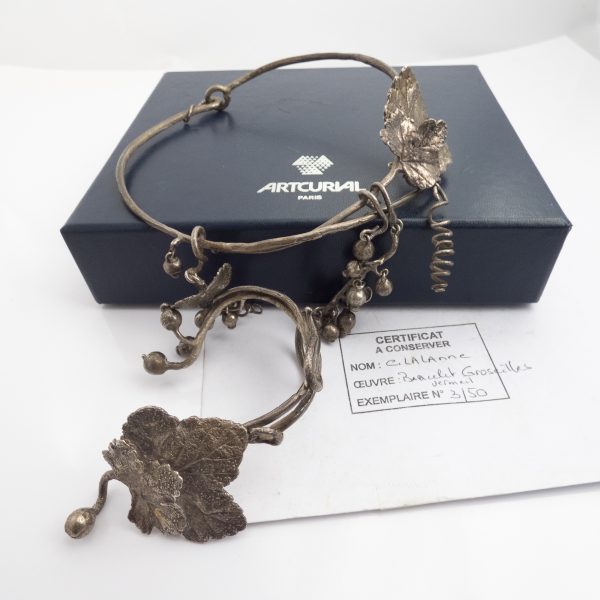 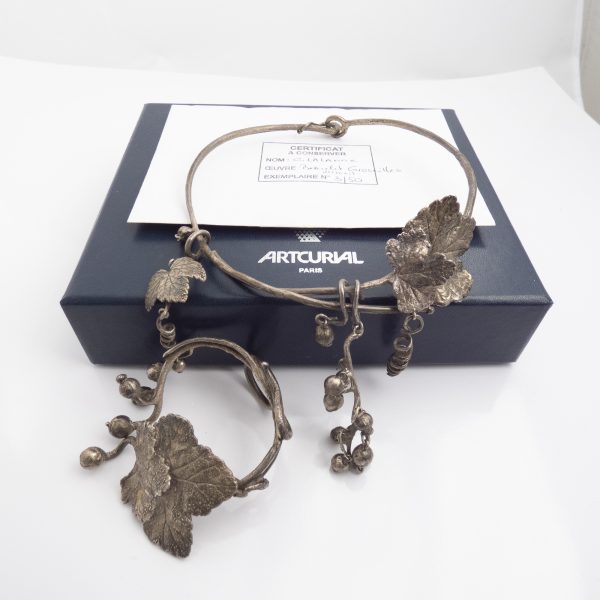 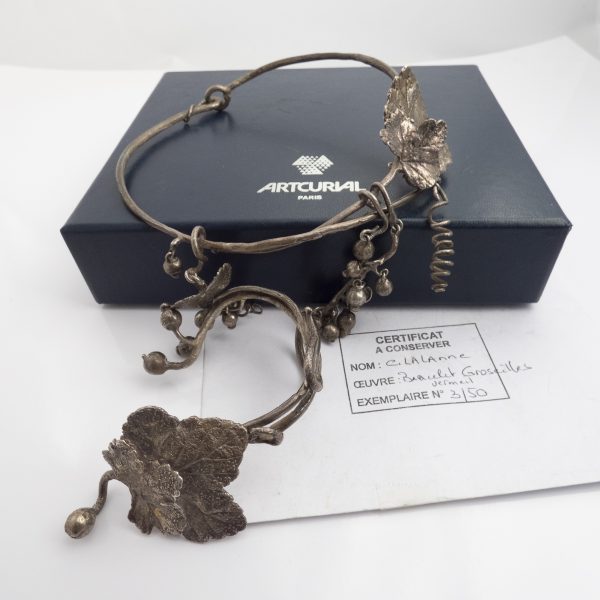 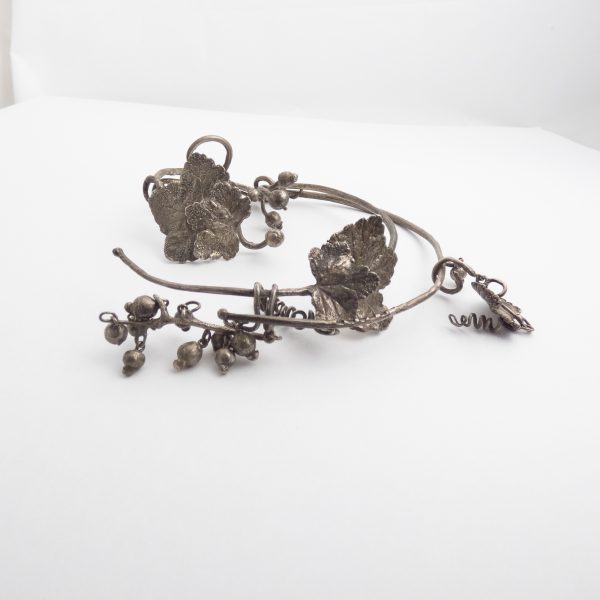 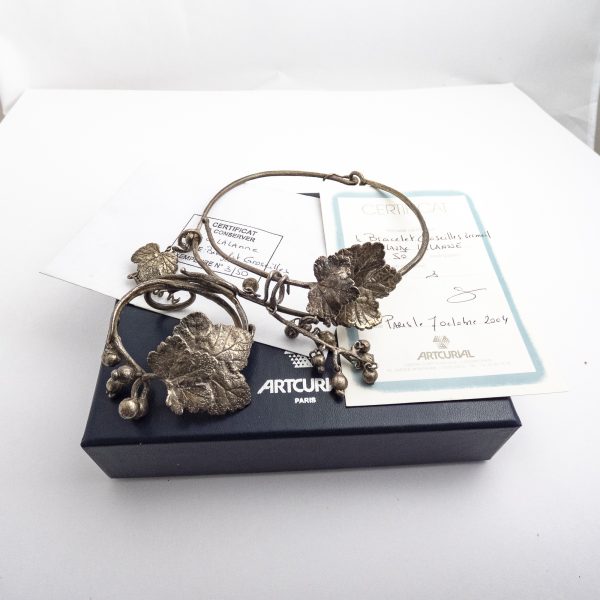 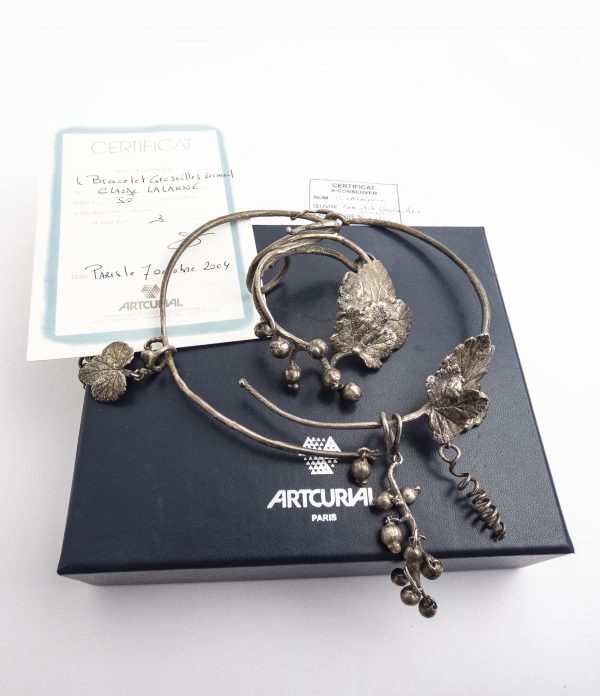 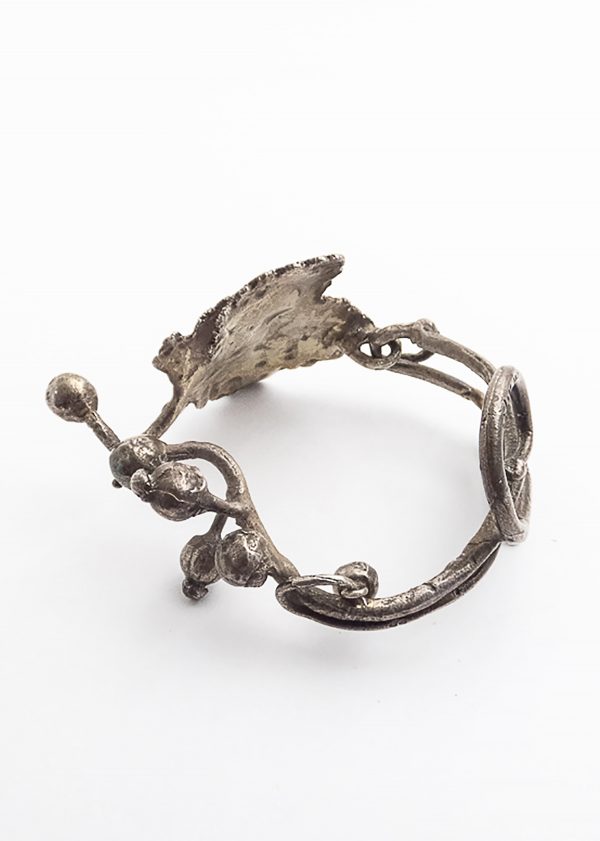 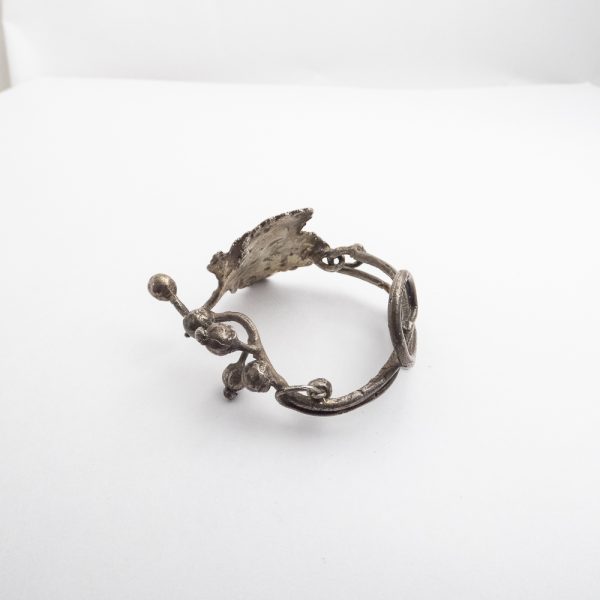 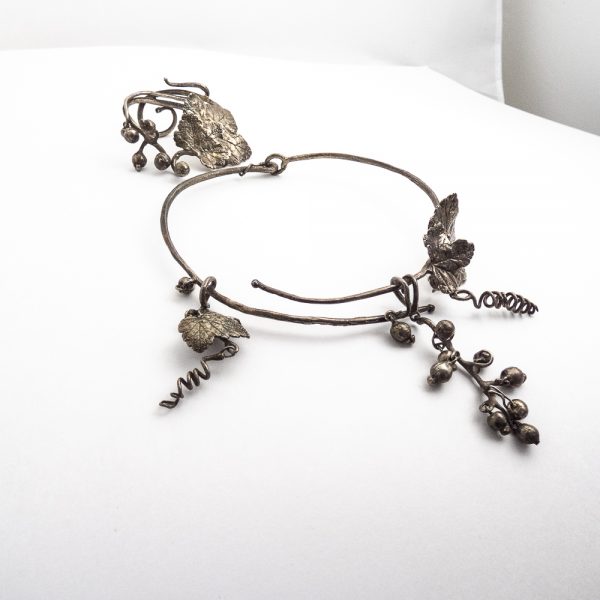 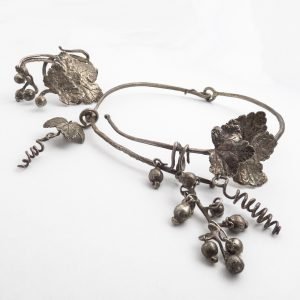 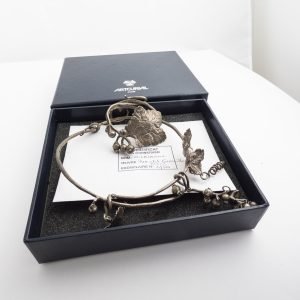 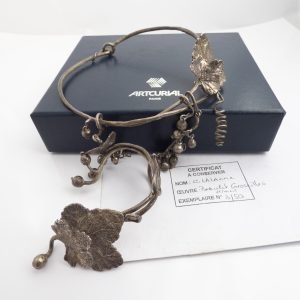 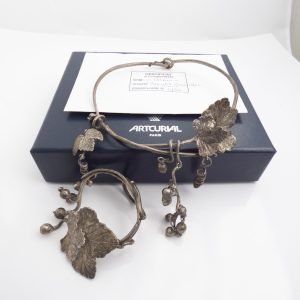 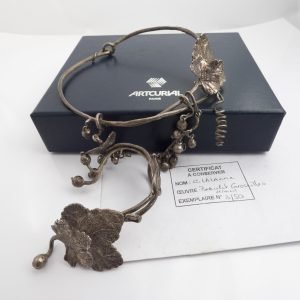 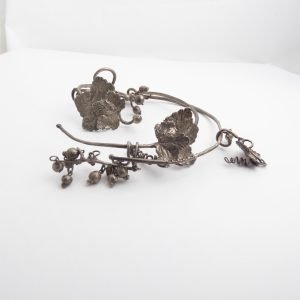 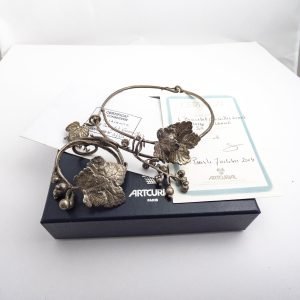 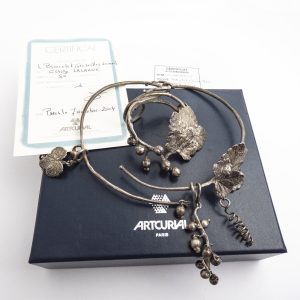 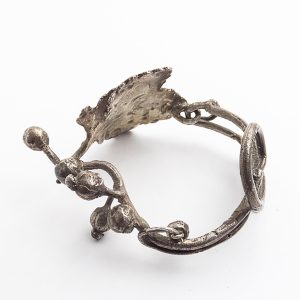 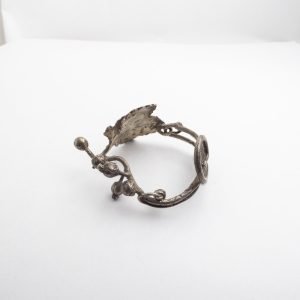 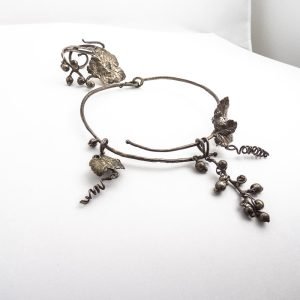 CLAUDE LALANNE signed Groseilles parure set (EXTREMELY RARE TO HAVE A SET)
Material: Vermeil (high quality–pure or sterling silver–plated with a thin layer of gold)
Circa: 1980-2005
Place of Origin: France
Artist: CLAUDE LALANNE (French, 1924 – 2019 )
Numbered 3/50 (3!!)
HANDMADE by Artist in her Fontainebleau studio
From the artist’s OWN PERSONAL COLLECTION
This is one of the LALANNE family heirlooms that Selection Coste is presenting

The shown certificate is only for the bracelet.

About the Artist:
Claude Lalanne was born in Paris in 1924, and was among few women of her generation to study architecture at the École des Beaux-Arts. She later trained at the École nationale supérieure des Arts Décoratifs. In the 1950s, she emerged as part of the last wave of the avant-garde in the French capital, and associated with the likes of Magritte, Man Ray, Duchamp and Ernst, and Constant Brâncuși, her neighbour in Montparnasse where she and her late husband, the artist François-Xavier Lalanne, lived and worked. The couple were affectionately known in Paris’ bohemian circles as Les Lalanne, also the artist name of their duo: working side by side, rather than collaboratively, they often exhibited together.

Bessides designing windows for Christian Dior flagship store in Paris, fashion designer Yves Saint Laurent was one of the many who were moved by ‘her ability to unite craftsmanship and poetry with equal depth’. Saint Laurent, who commissioned Claude in 1969 to create sculpted busts and waists in bronze for his A/W69 Haute Couture collection, then fitted over billowing blue dresses dubbed ‘Les Robes Lalanne’.

Considered one of the most dynamic and avant-garde husband-and-wife art couples of the 20th century, Claude and François-Xavier Lalanne, whose surreal sculptures and exquisite decorative arts are now more coveted than ever. Les Lalannes were courted annd collected by global collectors and celebrities alike. Their distinctive blend of fine and decorative arts, which was based on naturalistic forms, has made their work highly prized. Recently since her passing in 2019, there is an exponential increase in value of Claude’s ORIGINAL, hand-hammered wearable-sculpture pieces (not reproductions), such as this extremely rare parure set.

This gorgeous set was a part of Claude’s treasured personal collection, hence the 3/50, and given personally by her to a family member as a wedding gift.

Claude Lalanne draws uncanny inspiration from natural forms; she frequently transforms ephemeral shapes from her garden at Ury, Claude and François-Xavier Lalanne reiterated their philosophy that ‘The supreme art is the art of living’.

When Claude Lalanne passed away in April 2019, French president Emmanuel Macron and his wife, Brigitte, released a statement of condolences, speaking of how the couple kneaded together ‘imagination, humour and poetry’ to create works that ‘re-enchant the familiar and the functional’.

You will make a stugging statement with these Groseilles set which were  handmade by Claude Lalanne in the 80s, not reproduction.

CLAUDE LALANNE signed Groseilles parure set (EXTREMELY RARE TO HAVE A SET)
Material: Vermeil (high quality–pure or sterling silver–plated with a thin layer of gold)
Circa: 1980-2005
Place of Origin: France
Artist: CLAUDE LALANNE (French, 1924 – 2019 )
Numbered 3/50 (3!!)
HANDMADE by Artist in her Fontainebleau studio
From the artist’s OWN PERSONAL COLLECTION
This is one of the LALANNE family heirlooms that Selection Coste is presenting

Let us know what you think...

What others are saying

There are no contributions yet.

Continue as a Guest

Continue as a Guest

Any cookies that may not be particularly necessary for the website to function and is used specifically to collect user personal data via analytics, ads, other embedded contents are termed as non-necessary cookies. It is mandatory to procure user consent prior to running these cookies on your website.